At 21,413 TEU, the OOCL HONG KONG built by Samsung Heavy Industries steals the crown for the largest container ship ever built.

The previous record holder, Daewoo’s (DSME) 20,568 TEU MADRID MAERSK, delivered in April, effectively outranked Samsung’s 20,170 TEU MOL TRIUMPH. A total of 54 ships in the 18,300-21,400 TEU range have been delivered so far, and a further 51 units are due over the next two years, based on Alphaliner records. The cumulated capacity of the 54 units represents 5% of the total cellular capacity currently in service. By comparison, the 51 remaining units represent 35% of the orderbook. 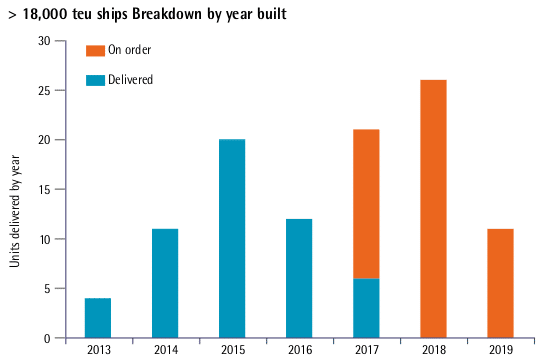 Despite their capacity differences, all these ships share similar dimensions: lengths range between 395 and 400m, fitting 24 bays of 40 containers. With breadths of between 58.60 and 59.00m, 23 rows of containers can be stowed on deck with 21 rows in holds. However, each series can stow either 11 or 12 standard containers under deck (depending on hull depth) and has different bay distributions due to the different placement of the deckhouse, engine room and funnel. It appears that the 400x60m dimensions currently represent an upper size limit for ship handling under real-life conditions – even in many mainline deep water ports.

Although there is not a single factor that limits shipbuilders and carriers to opt for even larger vessels, a further step up in container-ship sizes would probably require further shore-side investments, which would have to be recouped by supply-chain savings. Instead of building physically larger (longer and wider) vessels, designers have optimized 400x59m ships for higher intakes.

The date 1 April 2017 will be remembered as the day when container shipping witnessed its biggest services-and-fleet reshuffle. Some 700 ships ranging between 4,000 to 21,000 TEU were involved in major services swaps. The reshuffling, triggered by an alliance shake-up, spans several weeks until all these ships fall into place in the service jigsaw. Networks that operated under the four ‘old’ carrier alliances (2M, G6, CKYE, O3) are to be phased out and replaced by revised services under three new alliances (2M+HMM, OCEAN Alliance, THE Alliance).

The transition also brings capacity increases across the board with carriers gearing up for the summer peak season, as well as another market-share battle in the Asia-Europe and Transpacific trades. According to latest data collected by Alphaliner, total weekly capacity on the Asia-Europe and Transpacific routes increased by 7.1% and 7.4% respectively in April, compared to March. The new weekly capacities by alliance and by carrier are detailed in the accompanying graph. 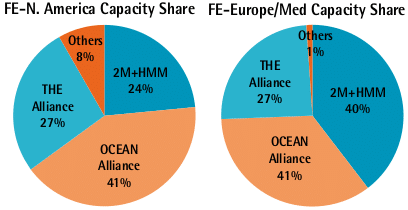